We use cookies to help improve our services, make personal offers, and enhance your experience. If you do not accept optional cookies below, your experience may be affected. If you want to know more, please read the Cookie Policy

Our customers love us!

Why do fire grates melt? A handy guide to prolonging the life of your grate. 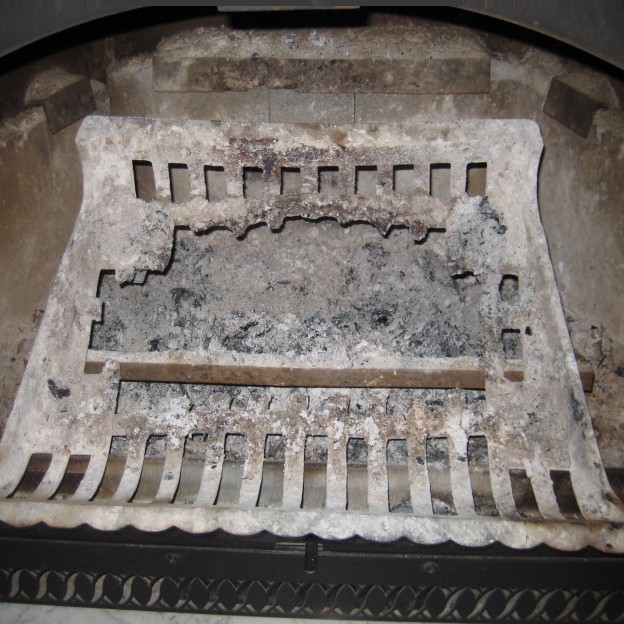 We are often asked by customers why their fire grate has bent, warped or even melted.

The quick answer is "your grate is getting too hot to the point where the cast iron is starting to melt". This overheating can be caused by a number of factors which we have detailed below in order of importance.

Most solid fuel appliance salesmen have seen bottom grates with their bars a jagged ruin, burned away beyond repair. Sometimes only the back portion has gone, sometimes the whole centre.

Once upon a time, the average open fire was lit during the day and allowed to go out at night.  The clearance of ashes from underneath was generally done regularly every morning, but sometimes people only partially cleared them or let them accumulate till they were actually in contact with the bars.  This had the effect of trapping the heat when the fire was alight, and eventually the temperature at the point of contact became so high that the iron was burned or melted. Over a period this resulted in the destruction of at least part of the bars.

Exactly the same thing can occur with modern fires, room heaters and stoves, which are usually kept alight continuously for the whole winter, especially those which provide for radiator heating. All modern appliances have some form of adjustable air control to regulate the burning rate of the fuel.  Air for burning the fuel passes through the air control and then through the fire bars.  This has a cooling effect on the fire bars and prevents them from seriously overheating when a bright fire is burning.  If, however, the ashes are not cleared regularly from under the fire bars, and allowed to build up to come into contact with them, the fire bars are then screened from cooling air and become sandwiched between a very hot fire bed and hot ashes.  The result is that roughly the same amount of heat as was used to melt the iron in the foundry is again applied, and the iron again starts to melt.

The trouble is accentuated if too much small fuel is used for banking overnight the continuous burning fire, room heater or independent boiler.  When these appliances are idling overnight no great heat is generated and no harm results.  But when the fire is riddled of ash in the morning, there is a tendency for small unburnt fuel to drop into the ashpan where it will burn, sandwiching the fire bars between two fires.

It must be remembered that appliances, like open fires, room heaters and independent boilers, kept burning continuously twenty-four hours a day throughout the winter, need to have the ashpan emptied of ash at least twice a day to avoid burning out fire bars.  In any case it is easier and safer to dispose of the ash before the ashpan becomes over-full.

1
Privacy Policy
×
What information do we collect? We may collect, store and use the following kinds of personal data: Information about your computer and about your visits to and use of this website including your IP address, geographical location, browser type, referral source, length of visit and number of page views. Information relating to any transactions carried out between you and us or in relation to this website. Information that you provide to us for the purpose of registering with us. Information that you provide to us for the purpose of subscribing to our website services, email notifications, and/or newsletters. Any other information that you choose to send us.   Disclosures We may disclose information about you to any of our employees, officers, agents, suppliers or subcontractors as reasonably necessary for the purposes as set out in this privacy policy. In addition we may disclose information about you: To the extent that we are required to do so by law. In connection with any legal proceedings or prospective legal proceedings. In order to establish, exercise or defend our legal rights (Including providing information to others for the purposes of fraud prevention and reducing credit risk); and except as provided in this privacy policy we will not provide your information to third parties.   Security of your personal data We have implemented security policies, rules and technical measures to protect the personal data that we have under our control from: unauthorised access, improper use or disclosure, unauthorised modification, unlawful destruction or accidental loss We will store all the personal information you provide on our secure (password & firewall protected) servers. All electronic transactions you make to or receive from us will be encrypted using SSL technology – PROTX You are responsible for keeping your password and user details confidential. We will never ask you for your password.   Policy amendments We may update this privacy policy from time-to-time by posting a new version on our website. You should check this page occasionally to ensure you are happy with any changes.   Your rights You may instruct us to provide you with any personal information we hold about you by contacting us on 0161 408 1431 or via e-mail: [email protected] You may instruct us not to process your personal data for marketing purposes by email at any time. (In practice, you will usually either expressly agree in advance to our use of your personal data for marketing purposes, or we will provide you with an opportunity to opt-out of the use of your personal data for marketing purposes.)   Third party websites The website contains links to other websites. We are not responsible for the privacy policies or practices of third party websites. Please let us know if the personal information which we hold about you needs to be corrected or updated.
I have read and accept